I was reading this article, ‘The Rise Of The Robots: What The Future Holds For The World’s Armies‘ by Steven Melendez yesterday. It’s quite good and gives a basic introduction to most of the major trends in the changes in military technology since 9/11. In the article, it referred to a report I’d read a while ago: ‘A Manual Adapting the Law of Armed Conflict to Lethal Autonomous Weapons Systems‘. What is interesting about this report is that it was written by Steven Groves.

His name didn’t mean much to me until I read the Melendez article. Groves used to be a researcher at the Heritage Foundation, then he became an adviser to the Trump transition team, and now works for the US ambassador to the UN, Nikki Haley. From his report, Groves seems to fit quite well into the category of ‘optimists’, whom he describes as pro-autonomous weapon system. 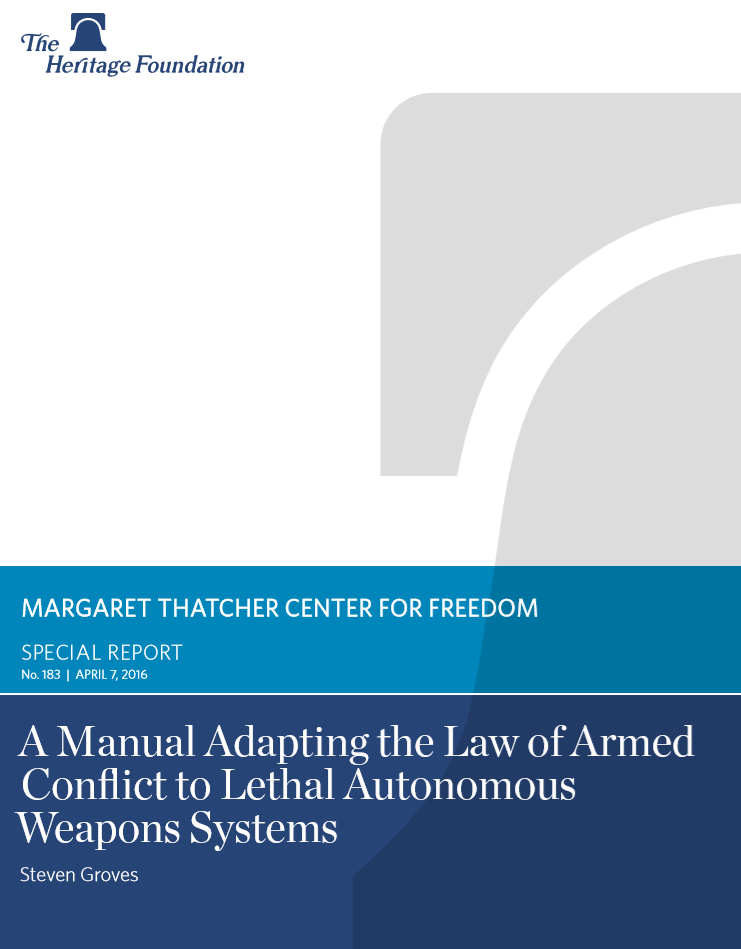 This is important because now there is a definitive cheerleader for AWS in the Trump administration. The impact of this is two-fold. First, the US Department of Defense directive on ‘Autonomy in Weapon Systems‘ from 2012 runs out this year. If it is not renewed, it stays the same for another five years, at which point it ceases to be current. The presence of Groves means that if he can get into the Pentagon, he could be involved in writing a new directive. Considering his apparent position from his report, this could be a much more liberal approach to regulating and restricting AWS that we have seen previously (and the 2012 directive was barely restrictive in itself.)

Secondly, having an AWS cheerleader not only in the US administration but also in the US delegation to the UN means that this could influence the US position at the discussions on AWS at the UN in Geneva. Already reticent to accept any voluntary restriction on the potential for itself to develop new weapon systems which could provide a battlefield advantage, the US delegation could become openly pro-AWS. The presence of a pro-AWS delegation at the meetings of the Certain Conventional Weapons Convention (CCW, generally where non-nuclear disarmament is discussed), could create an even more divisive atmosphere, and make any agreement much more unlikely.

Edit: However, he is just one person. And, as the Campaign to Stop Killer Robots helpfully pointed out to me, he is present in the US delegation to the UN office in New York. Yet, the discussions on whether or not to add a protocol to the CCW banning AWS will be taken at the UN Office in Geneva, with a separate US delegation. So, his influence might not be felt by the people who could actually have a tangible influence on the process.

Perhaps, as Groves suggests in his report, an informal expert manual on how the Law of Armed Conflict applies to AWS would be the best approach to regulating them. There has been an absence of large treaties binding states on their conduct of hostilities recently. The trend has been to replace these with expert manuals, such as the San Remo Manual on Naval Warfare, the Air and Missile Warfare Manual, and the Tallinn Manual on Cyberwarfare. The creation of a manual restarting the law of armed conflict as it applies to AWS is probably much more likely to come to fruition than an additional protocol to the CCW. However, Groves suggests that the US government should lead the way. Most of the recent manuals have been semi-academic pursuits initiated by university research institutions (although in the case of the Tallinn Manual, this was initiated by NATO), but including a multi-national collection of military and academic lawyers. Groves seems to suggest that by leading the creation of an expert manual on AWS, the US can make its stamp on how international law should apply. Yet, that is not how previous manuals have been written. They are a long process of debate and negotiation towards the final rules determined by the experts. The idea that by initiating an expert manual, the US could have the final say is wrong and simply reeks of American exceptionalism.

In the arms arena, the term “meaningful human control” signifies control over the selection and engagement of targets, that is, the “critical functions” of a weapon. “This means when, where and how weapons are used; what or whom they are used against; and the effects of their use,” according to Article 36, a UK nongovernmental organization. Humans should exercise control over individual attacks, not simply overall operations.

It’s a little more than a commander thinking about attack decisions alongside an AWS.

It seems to me that although Groves generally has a good idea about regulating AWS through an expert manual, his report lacks the nuance required. Hopefully, the increased experience of working at the UN with seasoned diplomats might make flesh out this proposal to be a little more realistic. After all, I do agree with him that an expert manual is probably the best method of regulating AWS in the future.